For the sake of Truth

There is one more sense which must be present in a human being: a sense of Conscience. If you think you have it, and if your heart is in the right place please read on.

I link to the website of News Front: a news agency objectively covering events in Russia, Donbass, Ukraine, the Balkans, Syria, around the world. Also there is a link to the film made by the German filmmaker about Donbass/Lugansk regions where citizens have to live daily, including children, under the shellings of Kiev’s Army. And a few other links to informative, honest and objective websites. 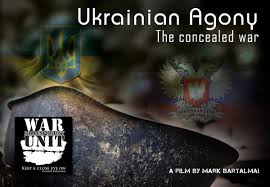 Film of Mark Bartalmai about genocide in Ukraine
committed by Kiev with support of Washington,
London and some EU governments.

This is what Ukrainian nazi did to Crimean citizens. In 2014 the nazi stopped busses with Crimean people, going back to Crimea from Kiev, and started degrading and torturing them physically. This was way before the Crimea’s reunification with Russia, and before the bloody war that Kiev Junta started against the disagreeing citizens in Southeast Ukraine. (please go to youtube, they won’t show this video here)

My site was not meant to talk about politics,

but in these times, like many other thinking people, I can’t keep quiet. In simple words, in my not perfect English (it’s not my native language) I will try to express the point of view of people who have a vision to clearly understand:

what is happening, who has seized power over people’s minds, and about the sad consequences of this for many countries, for people’s civilization, and most importantly – for future generations.

The mass media of the Western ruling liberal clique

manages to make people almost incapable of questioning and thinking. They believe the misinformation that is being dished to them for decades.

Look at even their elections. The liberal clique has been using most immoral methods to vilify and slander Trump, in order to keep their corporate power over the minds of the majority – gullible, poorly educated americans who can’t see what is being done to them. West political elites with the support of their powerful propaganda machine including fascist google, Twitter, – lied, rigged their elections, changed facts in google, changed and twisted even definitions of some words, and as usual – vilified Russia. Read the article of Michael Krieger:

Google Has Become a Major Threat to Democracy in America – I can add, not only in America, throughout the world. The word “democracy” itself actually is twisted by them.

Majority of people in West countries (where I live) have no idea about many significant happenings because those are being hushed or dished distorted. Any try to question their propaganda on TV, in magazines, papers, google and other instruments of their influence on people’s minds they label as “conspiracy theory”. It ceases to be only the war of informations, it has already become the war of convictions, human honour and morality.

Let’s open our eyes and turn to the real facts of the life that the liberal so-called democratic but in reality plutocratic, fascist, criminal governments of the West create for the people, with the support of their powerful and monstrously deceitful puppet media, including social networks and fascist google.


I am not afraid to be branded “homophobic”, “transphobic” or whatever “phobias” the liberal clique has come up with.

“Phobia” means fear. I am not “afraid” of homosexualists and similar stuff, other people of traditional values and healthy upbringing are not “afraid” either, so this word is initially deceitful. I am against the violation of the children’s rights for childhood, by LGBT propagandizers. Their target is first of all children. They push attempts to normalize homosexualism and other unhealthy states of human psychosexuality. I’m against violation of children’s rights for their childhood to be pure and healthy, against imposing sexuality on pre-puberty children. I oppose stating psychosexual deviations as “normal” and promoting that to young children and adolescents.

The Russian government adopted the law, supported by the overwhelming majority of citizens, prohibiting promotion of homosexuality to children through mass media and gay parades. Nowadays this is especially important. But here, too, the Western machine of lies is again in action: they are fooling people in West that Russia is a “bad place” for gays which is a sheer shameless lies.

Google’s attempt to transform culture. Offering gay advertisements is transforming culture. Today’s young person is driven by a fictional universe that was created by the mass media in the 20th and 21st centuries. Images, adverts, videos normalize homosexuality and prevent other opinions from challenging this sexual tendency, which has no support in human history. Even the very opportunity to discuss the relevance of education and open propaganda to children and adults of such sexuality is not possible today. Gender dictatorship lies in wait for us everywhere. Censorship in major scientific publications, preventing the exposure of myths about “gender” and orientation, censorship in the media and universities (including Catholic ones) is the “norm” of life today.

I link to the websites that stand against the google’s agenda to transform human culture by propagandizing the anti-human gender doctrine.

Film “War on Children”  by the Family Watch International

This multilingual site is called “Science for Truth”, and its mission is to call to an end lgbt propaganda on children and the vile misinformation about the alleged “genetic” causes of homosexuality.

Kiev Junta came to power after overthrowing the legitimate president. The ground for that was prepared by the long interfering from USA/UK governments. They financed the doctrine of hate towards Russia and the native language of Ukraine – Russian, in the school programs. They financed the long-existing groups of Hitler supporters in West Ukraine (those who’s grandfathers were hanging their own citizens in the II WW times). The new Ukrainian Government (Junta) is made mainly from nazi-fascists who worship and propagandize BANDERA ideology. Bandera was a criminal, a nazi who brutally killed many people of “wrong ethnicities” and own citizens in the times of the II World War, a partner of Hitler. Now Ukrainian Junta (mainly oligarchs and nazis) are desperately and treacherously creating the phantom new “history” and turn Ukraine against Russia, which IS the Ukraine’s roots.

Behind Kiev Junta there are also USA/UK military and government representatives, as well as support of EU government. You will not find in West mass-media and google the truth about Ukraine and its ancient history as Russia. You won’t also find its true history as a part of the country USSR until about 30 years ago.

At the beginning of the Soviet Union (about 1922) the heads of USSR in Moscow (capital of USSR), created the new republic of Ukraine, supported it, almost madeup and enforced its “language”, which in reality is only a dialect of Russian. During the Soviet period of time they kept giving towards Ukraine more and more territories. So the neofascist Ukraine’s lies about living “unhappily” in the country USSR which made them up and nourished them is a complete farce.

You won’t find much in English-speaking google about the new Kiev government’s genocide towards the majority – Russian-speaking and Russian-thinking population: internationalists, hard-working honest people who respect their real history, appreciate the cultural and international heritage of the country they used to live in (USSR). They keep respect for their countrymates, brothers, irrelevantly from their nationality*. But unfortunately, the last 30 years of devilish propaganda of hatred and schizophrenic madeup ideas have got its results: there are many people in Ukraine now, especially young ones, who believe the main line of their criminal government.

*In the USSR the word “nationality” was not a synonym to the word “citizenship” as it is in the West countries. The nationality meant your ethnic roots, your special belonging to one of the large or small ethnic groups which made the huge and multinational country called Soviet Union. One had the right to choose whether he wanted to keep it proudly in his passport, or not, and just put “Russian” as the “nationality” if he wanted.

You will not find in the internet much about the intimidation and killings of journalists in Ukraine that speak against the fascist/nazi official line, especially if you search in English, not in Russian. Google is changing history for its masters in Washington, London and EU vassal-governments. These are the reasons why Crimean citizens decided to reunite with Russia, like they were, Russia, until the treacherous “Perestroyka” which ruined USSR as a country. And these are the reasons why Southeast Ukraine (Donbass and Lugansk) stand against Kiev’s aggression. Nazi Kiev wants to steal their homeland and annihilate people there. Crimeans made their choice to break ties with the modern nazi-orientated Ukraine. Russia is being unfairly sanctioned and threatened for supporting Crimeans – its former citizens (of the Soviet Union) – in their decision to be with Russia and not with nazi Ukraine.

The misinformation, twisting facts, and lies about the World War II

of the West political elites (USA/EU/UK) trying to rewrite the history of the WW II have taken on a criminal scale. The Soviet Union liberated, mostly on its own, the world from Nazism and Hitler in 1945. The Soviet Union lost over 26 million of its citizens who fought for our peaceful life. Now West elites and their puppet mass-media are trying to diminish the huge role of the USSR in this Great Victory, those who fought for the sake of the future generations existance. Not only West is trying hard to diminish the heroic feat of the Soviet people – men, women, even chidlren who fought and died on the batterfields, but their lie-propagandizing machine is committing an action which could not be considered other than criminal: they take attempts to put Stalin on a par with Hitler! Stalin, irrelevantly from how he ruled his country and treated its people, was the leader of the country which liberated the victims of the concentration camps, went through all Europe on foot liberating country by country, bleeding and dying. They did this not only for their own homeland, but also for homes and children in other countries, for other countries inhabitants who were at that time burned, killed, dehumanized and experimented with. Those West politicians and ideologists who spread the terrible misinformation and devilish comparisons should be brought to justice.

• Syria, the country beautiful in past, is turn into ruins by the hands of the West proxi terrorists.

• Libya is barbarously destroyed. The Libyan president was brutally killed.

• Julian Assange is in prison and almost ruined, for speaking the truth about warmongering politicians of the UK and USA.

• USA military complex keeps opening its bases all over the world. Russia is getting surrounded by NATO.