The ancient vegetable of Russian cuisine 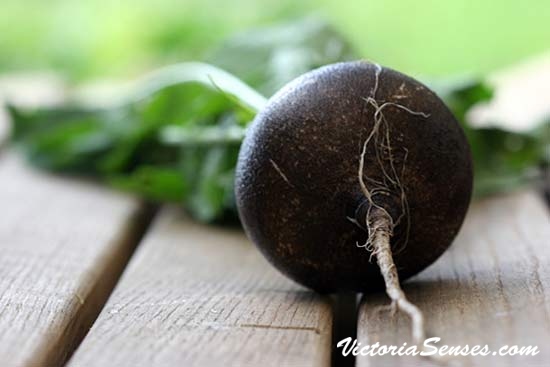 Having had a pretty long experience as a “regular eater” in a few countries, I thought about the difference between the tastes of the same products and the attitude for them and food in general, in different places. In traditional Russia, where I come from, food is respected, treated carefully, and good food is almost worshipped. Even though the consumption there is not so intensely stimulated and pushed on TV as it is for instance in the UK. In Britain the choice and variety of ready and half-ready meals is enormous and tempting. And the feel of living primarily for your stomach haunts you all the time.

The disparity between the taste of the vegetables, fruits and herbs that I buy in West Europe, and the flavours that I recall from my childhood in a semi-provincial place, in the Far Northeast of USSR/Russia is too obvious to my taste buds. The wild taiga, the streamy northern rivers and hills covered in high trees, grasses and wild berries were right on the outskirts of the town. My “taste memories” made me to become aware of the organoleptic quality of those products. And they are not much to do with the market understanding of the “quality”.

known as “Black Spanish radish” in Britain, is actally a traditional, ancient Russian food. Its history mentioned in the ancient recepies takes back to the 1st century CE. Its name red’ka has no direct translation into English, it translates as “radish” but it’s not really correct. Russian has different names for the different vegetables of this plant family. Horseradish is called Khren, the red radish is called Rediss. The black radish is Red’ka. Unfortunatelly it’s not found on the tables as often as it used to be. But it is still respected, available everywhere and very cheap in Russia. For instance, in Germany this vegetable costs surprisingly much for a regular table vegetable, and appears only on the shelves of organic products.

I find this product pretty unique, one of those that I would list in my virtual book of the “Culinary Purist”. Savoury, hearty, and very spicy, this is the way it should be – not watery and bland as I find it here. The real black radish by its taste and spiciness is somewhere between horseradish and red radish. But again – Russian red radish is spicier, more flavoursome, crispier.

Black radish and its juice are pretty special for their medicinal qualities. For many centuries black radish has been for the poor peasant families a treatment from plenty of diseases, an immunity booster, an anti-bacterial and anti-cough potion.

The way to prepare black radish:

The best way to treat and use it is to simply grate it – finely or coarsely depends on your chewing ability as well as your likes, or slice with fine thin slices. This vegetable is not like Asian Daikon which has minimum of taste and normally gets sliced with long fine strips. The black radish should show its daring bold taste to you, in case if it’s grown spicy as it should be. The finer it’s grated or sliced – the more juice it produces.
Sprinkle it with salt, mix together, and then soften its character with a good amount of unrefined sunflower oil – and this is all, actually.
This would make a great side for boiled potatoes, best if they are the soft-cooking type – normally more aromatic and tasteful. This will make a real and hearty winter dish. The meat or fish (best is semi-salted herring), or even poultry may or may not be present on this plate, black radish will still deliver you its robust and cheerful essence. It will satisfy your hunger for a simple and saturating food.

If you slice it finely – make sure you sprinkle first a bit of salt on it and let it produce its juice. Then poor it with whatever you prefer: unrefined sunflower oil, the same+mayonnaise, the same+table vinegar – depends on your taste. Then I always sprinkle it a bit with black pepper from the mill.

In the internet you can find a lot of recipies for black radish in various salads. But I prefer to prepare it with minimum ingredients. There are also almost forgotten ancient recipies of cold soups with black radish. Mainly they are based on Kvas – the wonderful Russian drink made of hard bits of black or rye bread, yeast, fermentation starter (zakvaska) and sugar.

When it’s proper, it is very strong (remember it has even medicinal qualities!), so its consumption at one time should be modest. Sometimes it may cause unpleasant sensations in your stomack, if you really overindulged. But here works the same rule as for red hot chilli, or other spicy food products. 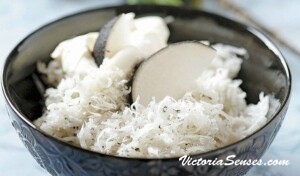